Love it or Hate it, Survey Reveals Users Love iOS 7 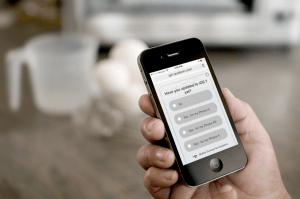 Love it or Hate it?

This is the question we asked new users of IPhone’s iOS 7 software over the weekend. With droves of people standing outside retailers for hours worldwide this past Friday for the new iPhone, it’s easy to miss the more pervasive story – millions of existing iPhone users essentially have brand new phone experiences with this update.

Well the results are in!

Over 200 people took survey – the first iOS 7 survey where the majority of respondents completed it directly from their newly updated iPhones (made possible with Qualaroo’s newly released mobile web surveys.)

Of the 85.3% of respondents who had updated iOS 7, the majority of them were using an iPhone 5 with the update.

Respondents who hadn’t performed the upgrade cited not enough space (iOS 7 needs at least 3GB), waiting for all the glitches to be worked out, and the update being too time consuming as the main reasons for not upgrading. And not surprisingly, laziness also appeared as a contributing factor for not performing the upgrade.

“It’s quite a new feel from the previous iOS updates. I enjoy the new interface, which makes you feel like you have a completely new phone.” 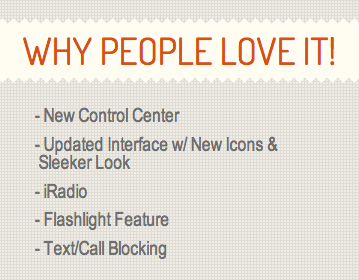 We equated users who responded with a “Good” rating or a “Very Good” rating with loving the new update. Most of the people taking the survey were pleased with the changes and commended Apple on the new software. “(I like) the ease and functionality of the OS. Seems like everything is literally at your fingertips. Apple really got it right this time.”

Many praised the update for being more user friendly with one respondent saying that “the new design is a lot more convenient” and another saying “you can find your settings easier and can now have multiple apps open at the same time.”

“Flat design is ugly, I will never get used to it. Slows down my whole phone and drains my battery. Overall made my phone worse and I hate my phone now.” 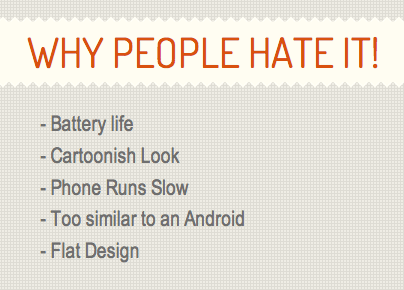 We categorized people who said they either rated the new update as “Bad” or “Very Bad” as those who hated it. As expected, some users were not very happy about their new update. “Excessive animations, overuse of red and blue text, flat design looks cheap, color scheme is goofy, etc.” While supporters of the new iOS tend to think it makes life easier, a few respondents didn’t seem to agree. Feedback from those who hated the update included comments like “Interactions [were] sometimes clunky”; “Too minimalist in some places”; with others saying just the opposite “Too many buttons.”

Despite some of the negative reviews, most people are pretty content with Apple’s latest effort. Change isn’t always easy as one respondent admits, “I think that the design appeals to a broader audience now. I do miss the old way it looked (but) that’s usually my feeling over change.” With all new things in life, there’s always an adjustment period but as Robert Kennedy once said, “progress is a nice word, but change is its motivator, and change has its enemies.”

Haven’t taken the survey yet? Let us know what you think! Click Here