How to Get Customers to Actually Fill Out your NPS Survey

You can only grow if your product adds concrete value for a significant number of people. With two simple questions, Net Promoter Score (NPS) cuts through the BS and tells you point blank whether you’re delivering that value to your customers, and how you can deliver more.

Unfortunately, customers hate completing even the shortest surveys. Most on-site surveys get a 5-20% response rate, and depending on how many customers you have to target, that might not be enough to draw actionable insights.

Getting the responses you need is easier said than done. From the customer’s point of view, someone they pay is asking them to spend time on something that offers no immediate value. You need to flip the script by making your survey as seamless, easy, and enticing as possible. Here are the three best ways to make sure customers actually fill out your NPS survey.

Back when landlines were common, everyone was familiar with the experience of a telemarketer calling right in the middle of dinner. It was annoying to have a meaningful event interrupted, so most people would just hang up on them. If your NPS survey also has poor timing, then you’ll get the same results as the telemarketers. You need to time your NPS surveys so they appear when customers are most willing to fill them out.

That has two components. In the most immediate sense, you need to time NPS so that it’s not popping up at a crucial moment in their visit to your app or site. But looking at the customer’s overall lifecycle, you also need to make sure your survey is reaching them at a time when they’re familiar with your product and ready to give feedback. 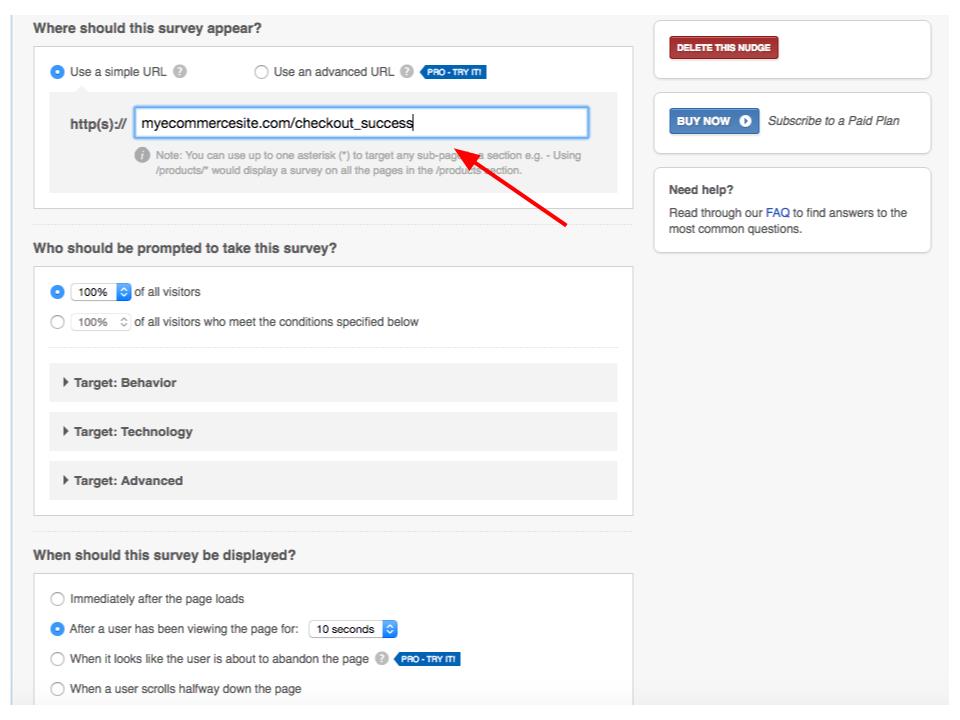 If you run an e-commerce store, you can schedule your NPS survey to appear only once customers have reached the checkout page

Here are a few tips to make sure your NPS survey is reaching your customers when they’re ready and willing to fill it out:

By timing your NPS survey just right, you ensure that completing it feels like a natural step to take for your customers and not like a chore.

Customers are naturally inclined not to fill out a survey, so any hitch in the process will be enough for them to throw their hands up and say, “Forget it.” Your NPS survey’s UI needs to be totally seamless if you want anyone to complete it.

Think about it this way. According to the user onboarding experts at Appcues, the average app loses over 80% of users within three days of them downloading it, mostly because of subpar UI. And that’s when the customer has purposely sought out the app, thought it looked useful and decided to download it. Your NPS survey, on the other hand, just pops up out of the blue. That means it’s even more critical that it be really simple for them to bother completing it.

NPS: fast, easy, and all on one page.

Here are a few tips to make your NPS survey’s UI sleek and inviting for users.

Those tactics do more than ensure a smooth experience. They also signal to customers from the beginning how easy the survey will be, which makes them more willing to participate.

Three days before sending out a crucial survey to its 6,000 blog subscribers, Groove’s marketing team realized they’d made a big mistake. They’d given their audience no incentive to participate. Groove managed to partner with other SaaS companies, who agreed to give away a few months on their platforms to lucky respondents. The result? 1,500 people completed the survey.

You’re asking customers to do you a favor by filling out an NPS survey, so it’s natural that they ask, “What’s in it for me?” If you can head that question off with an intriguing reward, they’ll be much more likely to fill it out. 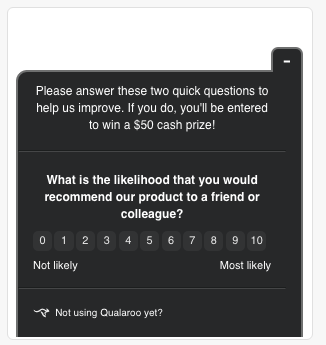 Here are three possible ways to incentivize customers to participate in your survey:

A reward flips the script for the customer and changes filling out your survey from a chore into a value-add.

Following these strategies will do more than increase the response rate on your next NPS survey. It’ll also let you build a roster of customers willing to fill them out again and again.

The NPS survey isn’t a one-and-done. It’s designed to be sent to customers multiple times throughout their life cycle, so you can track your performance over time. If you give customers a positive experience with NPS, then the tool becomes a constant source of improvement.

Get Started FreeGet a Demo
Prev post
Why Product Managers Need NPS Next post
Qualaroo Hops Across the Pond for UX London
Do you want a free Survey & Feedback Software?

Are you searching for the best live chat software that meets your customer service and support needs?

A Step by Step Guide: Testing Your Prototype

When designing a product, delivering something that offers a viable solution to the audience is the final step of a long and iterative process. As you try to do this while creating something that can establish itself in the target market as well, failure at any stage is just a part of this long and complicated process. This is where prototype testing comes in!

How (& Why) To Follow up With NPS Survey Detractors

A Net Promoter Score or NPS collected with NPS survey tells you where you stand with customer loyalty — but it’s what you do with that score that determines how you’ll grow.

Analytics and performance metrics show the health of your products or services. But to diagnose the problems and issues, you need to dig deeper. And there is no better alternative for collecting valuable information with customer feedback than to listen to the people who use your products directly. Your customers are the primary source to find ways to improve the products.

Finding the best help desk software for your business is not as easy as spotting the sun on a clear, bright day.

As an entrepreneur or anyone working in the marketing, product development, or user interface design field, you already know how much customer feedback is involved in every stage of every process.

How to Quickly Grow Your Email List: 42 Proven Ways

Do you find yourself losing sleep, wondering how to grow your email list?

We are back with another installment of our 'best of series'. Today let's look at some of the best Refiner.io alternatives.

Forbes describes ignorance towards conversion rate optimization (CRO) as business suicide and points out that CRO tools offer an ROI of 223%.