Home  ›   Blog   ›   How Hootsuite Increased Conversion By 16% With One Question

How Hootsuite Increased Conversion By 16% With One Question

A first impression is everything. That’s why most products’ landing pages aim to communicate their product’s mission at a glance.

If a landing page doesn’t prompt a lead to become a customer, it often means something got lost along the way—a customer reached the page expecting one thing, but they got something else. So when you figure out why leads’ expectations aren’t being met, you’ll get those conversion numbers up.

Hootsuite, the most widely used social media management platform, was able to get to the bottom of this problem with one on-site survey question. Here’s how.

Hootsuite’s growth team took a hard look at what was happening when people reached that branded landing page, by analyzing the landing page and measuring the CTR to the pricing page. As Senior Growth Strategist Jaxon Lam told us, “Based on different data points and heuristic landing page analysis that we had completed, we hypothesized that this branded SEM traffic still required more information about our core value prop and functionality.” As a result, people who needed Hootsuite were bouncing.

So Hootsuite put that hypothesis to the test. They implemented a short on-site survey on their branded landing page and asked whether there was enough information to make a decision. 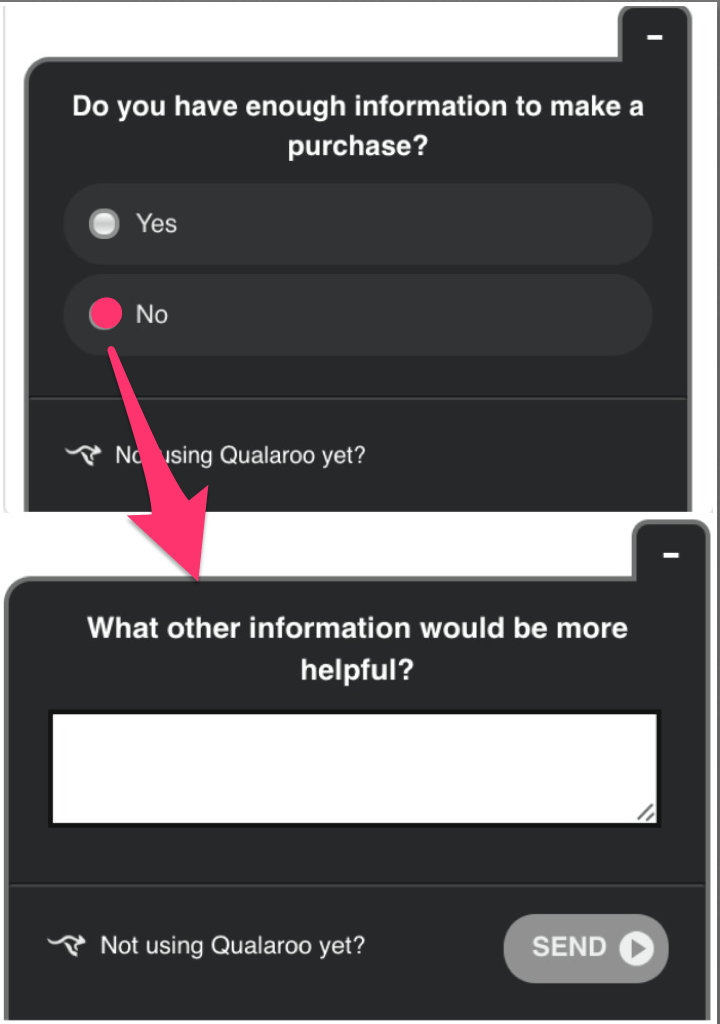 The results validated that hypothesis. Out of a sample size in the mid to high hundreds, around 65% of the traffic said they needed more information before they could make a decision.

Even though their branded traffic knew the name “Hootsuite” enough to search for it, they didn’t understand what Hootsuite actually does—and that was because the landing page didn’t communicate Hootsuite’s core value proposition.

If people don’t understand what your product does, it doesn’t matter how many descriptions you include about its advanced features. If your landing page doesn’t make the core function exceedingly clear, you won’t get those conversions.

How Hootsuite Used Survey Responses To Redesign Their Landing Page

Armed with their survey results, Hootsuite had a clear path to take action and revamp their landing page. They discovered that the following qualities limited the impact of their core value proposition:

As it stood, it made sense to Hootsuite that none of these were triggering an Aha! moment for their leads. 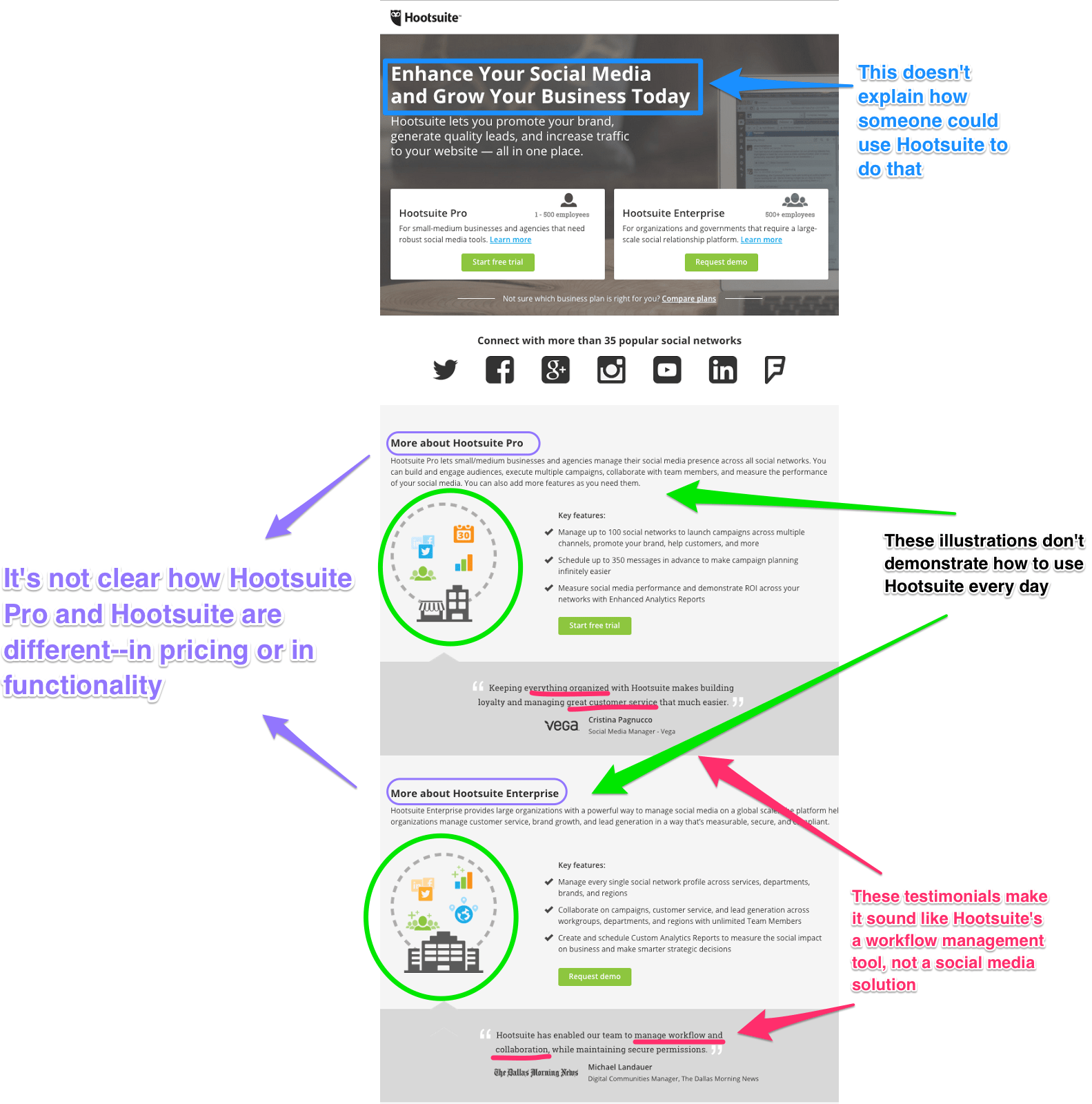 When Hootsuite changed their landing page, they clarified their product’s core functions.

Here’s how it looked after:

When the Hootsuite team A/B tested the original and new pages, their results showed a 16% lift in conversion at a 98% statistical significance. Even though the new page had a decreased CTR to their billing page, the quality of the page view was much better and led to an exponentially higher conversion rate.

Using surveys to direct CRO efforts can help companies reach people who need their product most, and help them understand the solution it provides. If leads say they don’t have enough info about pricing, companies know to provide it. If leads need visuals, companies will add it. Surveys are the key to unlocking the friction that stops individuals from converting—and eliminating it.

Surveys Give You A Direction

As Hootsuite saw, surveys can be more than NPS or customer temperature tools. Using them to direct your CRO efforts can show you what’s working, and what needs to be improved. Because your survey results show you what to do next, your surveys become a mechanism for your company’s growth.

Finding the best help desk software for your business is not as easy as spotting the sun on a clear, bright day.

As an entrepreneur or anyone working in the marketing, product development, or user interface design field, you already know how much customer feedback is involved in every stage of every process.

How to Quickly Grow Your Email List: 42 Proven Ways

Do you find yourself losing sleep, wondering how to get more email subscribers?

We are back with another installment of our 'best of series'. Today let's look at some of the best Refiner.io alternatives.

Forbes describes ignorance towards conversion rate optimization (CRO) as business suicide and points out that CRO tools offer an ROI of 223%.

According to a 2020 study, companies spend 50% more now on SaaS products than they did the year before. Also, the number of unique apps that SaaS companies are using has increased by about 30%.

In this blog, we will go through the important aspects of a lead generation tool and provide you with a comprehensive list of some of the best lead generation tools in the market. We have compiled a detailed list of tools with their features and pricing to make it easier to compare them and choose the right one for your business.

Whether it’s your homepage, a link from an advertisement, or the result of a popular search term, a landing page or LP is highly likely to be the very first ‘real’ interaction between a visitor and you. At first glance, your visitors get an indelible impression that makes or breaks a sale.

Customer Satisfaction Metrics To Monitor in 2021

Customer satisfaction (CS) is not just a key but like a blockchain-protected passcode that will allow you to access success as long as you know how to use it.